Algorithms and data structures can be intimidating. The goal of this post is to explain some approaches to solving hash table algorithm problems providing clear examples with detailed solution explanations. I’m hoping this will help anyone uninitiated alleviate fears and make bigger strides in conquering these challenging problems.

While attending Fullstack Academy, I participated in an algorithms class taught by alumnus Clément Mihailescu, an employee of Google. I found the class to be enlightening and engaging. (I was also star-struck because he works at Google.) He founded AlgoExpert which is a top-notch platform for practicing interview problems. I highly recommend it for those who are serious about acing their interviews. I was inspired by the power of hash tables after the class and went on a journey to solve as many hash table problems as I could find.

A hash table is a data structure that provides a dictionary-style lookup where a “key” is provided and a “value” is returned. If you’ve worked with object literals in JavaScript (aka associative arrays), you’re familiar with a common implementation of the hash table data structure. Here’s one:

Let’s see a more algorithmic use for the data structure. This example assigns string characters as the “key” and their frequency count as the “value:”

JavaScript provides us this data structure without us having to know how it works. I want to go a little behind the scenes into the hash function algorithm, its dangers, benefits, and drawbacks.

The process of looking up a value from a given key is particularly clever (in my opinion): 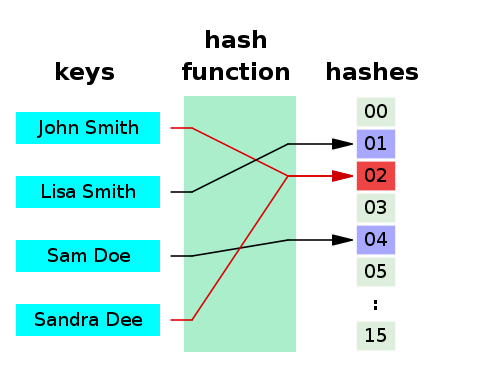 If you’re a little wary of the image above where both “John Smith” and “Sandra Dee” point to the same address, you’re not alone. If two or more different hashed keys resulted in the same array index, those are considered “collisions.” Not accounting for collisions is dangerous because we risk losing data. To prevent data loss, the hashing algorithm must have collision resolving methods and (ideally) prevent collisions in the first place. For a data loss example, let’s say both key1 and key2 when hashed resulted in array index 0. Then, data for key1 is written to that index. Then, data for key2 is written to that index. Finally, if I want the data from key1, it’ll have been overwritten by the data of key2! No good.

Let’s talk “Big O.” In terms of time complexity, writing and retrieving data using a hash table are O(1) operations. That’s amazing in terms of efficiency! Less optimal is sorting the data, you’re better off using a different data structure if that’s important for your use case.

I encourage you to check out the articles below for more on “Big O” and in-depth hash table lessons.

There are many great “code challenge” websites to practice at computer science problems. When I wanted to work more with hash tables, I discovered that LeetCode has a tagging system which links to 81 hash table problems!

Other great sites for coding challenges:

After solving around 6 problems of various difficulty on LeetCode, I observed some general principles and forms:

Javascript objects (what I’ve used for hash tables) are extremely versatile. I was able to implement them with the following patterns:

Basic Gist: If a pattern (like ‘abba’) matches an input string (like ‘dog cat cat dog’) then it’s a match. (‘dog cat cat fish’ wouldn’t be a match.)

Reflection: This certainly works, but I can probably do this with only one hash table. {dog: true} doesn’t have extra meaningful data and between my two hashes, I store each word twice.

Basic Gist: Given an array of integers, return indices of the two numbers such that they add up to a specific target. (target could be 9, for example.)

Reflection: I worked on this problem 5 months before working on it recently. I unknowingly created an O(n^2) algorithm by using indexOf to check the entire array sliced at each index as I iterated over it. The runtime was 548 ms (more than 5 times slower than the hash solution.) I think I can improve my hash solution by implementing it without Object.keys(hash). I can’t actually explain (at the moment) why I used that, and didn’t use nums[i].

Note: I used the “Two Pass” solution. Read more about that and other solutions here: Two Sum - LeetCode Articles. It may be locked until you’ve solved it yourself.

Basic Gist: Given an array of integers, every element appears twice except for one. Find that single one.

Reflection: Initially, I created two hashes to make sure the algorithm was running correctly. I realized I could use a Set later and and simply delete the num entry in once, without storing it in twice. Oddly enough, my runtime went from 64ms to 84ms with the Set implementation. Maybe objects are optimized to run more quickly than sets (?)

Note: there is a very nice solution explanation here: Single Number - LeetCode Articles. It may be locked until you’ve solved it yourself.

Basic Gist: You have to find where “an error occurred.” Any given input will have a number missing and a number duplicated. Example: [1,2,2,4]

Reflection: I feel like the efficiency of the algorithm is quite good. I only store what’s necessary. Keeping track of the edge cases was a bit cumbersome for me. I’m sure there’s a graceful way to do it without the final check that I do.

Reflection: I first implemented this solution in 2 passes. After seeing the official solution, I decided to wrangle mine into the single pass version. There’s even more I could do to clean it up, but I’m pretty happy with it.

I’m no expert at algorithms in general, but I’m definitely enjoying learning about them. The more I learn, the more I’m able to visualize different approaches to problems and begin to optimize my solutions. Please contact me below if you have comments about this article and/or suggestions for improvement.

This “enrichment piece” was written as a student at Fullstack Academy.